The World Health Organization on Sunday reported the largest single-day increase in coronavirus cases by its count, of which over 15,400 cases came from India.

Here is a list of State Helpline numbers. You can track coronavirus cases, deaths and testing rates at the national and State levels here.

Here are the latest updates:

The number of COVID-19 cases in Indore rose to 4,373 on Monday after 44 more people tested positive for the viral infection in the Madhya Pradesh district, a health official said.

As many as 1,404 samples were sent for testing during the last 24 hours and out of these, 44 came out positive, Indore’s Chief Medical and Health Officer M.P. Sharma said.

The Delhi High Court Monday said 5-7 days cannot be taken for getting COVID-19 results for pregnant women prior to admitting them in hospitals for child-birth and asked the ICMR and AAP government to look at expediting it.

The observation came from a bench of Chief Justice D.N. Patel and Justice Prateek Jalan during hearing of a PIL by a lawyer who has sought that test results of pregnant women be given priority.

Concerned over increase in COVID-19 cases in the city, Karnataka Chief Minister B.S. Yediyurappa on Monday directed officials to implement lockdown measures strictly in the clusters which have reported more number of infections.

Mr. Yediyurappa held a meeting with Ministers and senior officials regarding containing COVID-19 in Bengaluru and said it can be achieved only if preventive measures are implemented strictly and asked the officials to work in this direction.

The Delhi High Court Monday said it expected the AAP government to “scrupulously” follow the directions issued by the Lieutenant Governor (LG) on June 8 in connection with testing of asymptomatic COVID-19 patients.

Of the 503 ‘COVID-19 care railway coaches’ allotted to Delhil by the Ministry of Railways for treatment of mild or very mild cases, more than half (267) will be stationed at the Anand Vihar railway station in east Delhi.

In Delhi, a skeletal crew in charge of preparing the coaches are the only personnel at the station, which used to see thousands of passengers daily before the lockdown was imposed.

As authorities implement contingency plans across the city ahead of “peak” in cases, labourers at the railway station are busy cleaning, fixing signboards and preparing the area for its new role.

Amma Makkal Munnetra Kazhagam (AMMK) founder, T.T.V. Dhinakaran, on Monday expressed concern over the growing number of fresh COVID-19 infections in districts other than Chennai and its three neighbouring districts.

Alluding to Chief Minister Edappadi K. Palaniswami’s statement that “Only God knows when the COVID-19 pandemic will end,” Mr Dhinakaran, in a statement, said it would not be fair if the State government, instead of taking action to contain the spread, evaded its responsibility by “putting the blame” on God.

COVID-19 cases continued to pile up relentlessly across Pune district with more than 160 new cases being reported over a 12-hour span on Monday, taking the district’s total case tally to 15,842, said authorities.

“A total 163 new cases have been reported since Sunday evening. 75 of these were reported between 9 p.m. on Sunday and midnight, and a further 88 cases till today [Monday] morning,” said Pune District Health Officer Bhagwan Pawar.

Raising concern over the rising number of COVID-19 cases and deaths in Maharashtra, the Bombay High Court on Monday asked the state government to clear its stand on permitting the ICSE board to conduct its pending examinations of Classes 10 and 12 in July.

A division bench of Chief Justice Dipankar Datta and Justice S.S. Shinde said the state government cannot maintain an ambivalent and ambiguous stand, that if the number of students who opt to appear for exams is few, then permission would be given for it.

COVID-19: For first time since 1565, Ambubachi sans fair at Kamakhya

Ambubachi, the festival marking the annual menstruation of the presiding Goddess, began at the Kamakhya Temple on June 22 without mendicants, hermits and devotees for the first time in almost 500 years.

Many places of worship in Assam had opened after the State government went on ‘unlock’ mode from June 3. But the Kamakhya temple administration decided to keep the premises locked in view of the spike in COVID-19 positive cases in the State, primarily Guwahati.

As of now, the national transporter has deployed a total of 960 “COVID Care” coaches in five states — Delhi, Uttar Pradesh, Madhya Pradesh, Telangana and Andhra Pradesh.

Chief Minister Arvind Kejriwal on Monday said numbers related to Coronavirus patients in the city over the last week seemed to indicate that things were improving.

“Today there are around 25000 active Coronavirus cases in Delhi; 33,000 people have been discharged after being cured. Precisely a week ago there were 24,000 active cases. Only 1000 active cases have increased, it seems that the situation is getting balanced,” Mr. Kejriwal said.

He also said the Delhi government would now give oxygen concentrators to people in home isolation in the city.

Around the world, efforts to battle the virus continues to yield mixed results. While infections slowed in China and South Korea, suggesting progress in stemming their newest outbreaks, the situation in Brazil, Iraq, and the United States continues to be grim.

In the United States, experts say the resurgence in infections is not a so-called “second wave” but a continuation of the first wave of outbreaks as the number of cases plateaus.

Civil defence volunteers and home guards deployed in the coronavirus containment zone in Naraina area of West Delhi were allegedly attacked by a group of locals after the former refused to deliver ‘non-veg’ at the latter’s doorstep, said a senior police officer on Monday.

“People were making unnecessary demands for non-essential items, including non-veg food, and argued with civil defence volunteers and home guards to deliver items at their doorstep. A heated argument ensued after volunteers refused their demands. A group of locals thrashed volunteers and policemen who intervened,” said a police officer.

“We have registered an FIR against residents under relevant sections of the IPC (Indian Penal Code) and Epidemic Diseases Act for attacking policemen at Naraina police station. The case is under investigation. The people involved in the attack will be identified with the help of CCTVs and mobile videos of the attack recorded by volunteers and locals,” added the officer.

Data | Domestic violence complaints at a 10-year high during lockdown

During the first four phases of the COVID-19-related lockdown, Indian women filed more domestic violence complaints than recorded in a similar period in the last 10 years. But even this unusual spurt is only the tip of the iceberg as 86% women who experience domestic violence do not seek help in India.

In between March 25 and May 31, when the nation-wide coronavirus lockdown was in progress, 1,477 complaints of domestic violence were made by women.

This 68-day period recorded more complaints than those received between March and May in the previous 10 years, finds our data team.

Amid rising number of COVID-19 cases, the Haryana government has said final-year MBBS students studying in government and private medical colleges will be deployed for effective management of the pandemic.

The director general of medical education and research in Haryana said in an order that 1,106 final-year MBBS students of 11 government and private medical colleges in the State have been assigned COVID duties and they shall report to civil surgeons of the districts concerned.

The directors of medical colleges and civil surgeons shall ensure that the students are provided all necessary training, it added. – PTI

Changing our approach towards mask use

Lately, a series of studies has provided evidence that widespread mask use can help reduce the spread of COVID-19 and considerably slow the pandemic. With world opinion coming round in favour of mask use, early this month the World Health Organization adopted a slightly more favourable position towards widespread mask use than earlier.

India’s initial scepticism towards widespread mask use continues to linger at a time when this simple public health intervention is more crucial than before. A concerted nationwide drive to ensure universal mask use has remained lacking, argues Soham D. Bhaduri, a Mumbai-based physician.

Delhi prison witnessed its first COVID-19 death after a 62-year-old inmate, who was lodged in Mandoli jail passed away on June 15 in his sleep. There was no apparent cause of death. Later, he was tested positive for COVID-19 on June 20.

Following the due procedure, Director General (Delhi Prisons) Sandeep Goel said, inquest proceedings were conducted by Metropolitan Magistrate and a COVID-19 test was conducted on the body, the result of which came as positive on Saturday.

A riot of colour at Mahim station is expressing what every Mumbaikar is thankful for: the efforts of essential service providers in the face of rising COVID-19 cases.

The large, continuous set of murals titled, ‘Heroes of Mumbai’ have been painted on the façade of Mahim railway station as an initiative of Western Railway (WR) in association with the ST+ART India Foundation and Asian Paints. 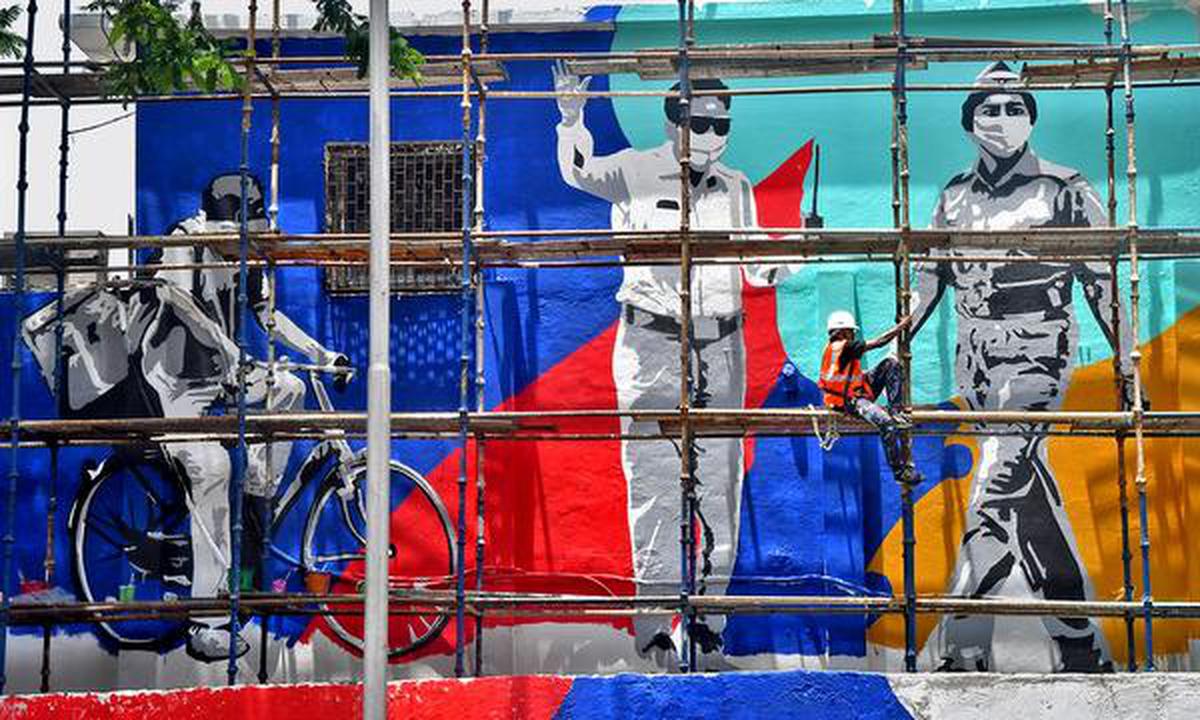 The mural depicts doctors, nurses, police personnel, vegetable sellers, delivery persons and sanitation workers who have worked throughout the lockdown, exposing themselves to the risk of infection.

The death toll is now 13,699,  after 445 new fatalities were registered in the past 24 hours, says the Union Health Ministry.

The case count, meanwhile, has climbed to 4,25,282 after 14,821 fresh infections were detected since yesterday.

Tennis world got a taste of the coronavirus infection after World No: 19 player Grigor Dimitrov tested positive for COVID-19.

The Bulgarian featured last week in the Serbia leg of the Adria Tour exhibition event organised by top-ranked player Novak Djokovic. The event has been cancelled.

Djokovic, meanwhile, had earlier said he would be against a compulsory coronavirus vaccination if it became a requirement for tennis players to travel to tournaments.

Like the rest of the sporting world, tennis has been on pause since early March. Indian tennis players have been utilising this time to work on a career beyond tennis, including a racquet customising business.

An 85-year-old man, who tested positive for coronavirus earlier, succumbed to the infection on Monday, making it the first case of death due to the viral disease in the State, Health Minister Vishwajit Rane said.

While Mr. Rane earlier said the deceased was a woman, he later clarified in a tweet that the victim was a man.

The man, belonging to Morlem village in North Goa district, was undergoing treatment at the ESI hospital, a designated facility for COVID-19 patients, he said.

The State government has already declared Morlem village, which falls under Valpoi, the Assembly constituency of Rane, as a COVID-19 containment zone.

Dharavi turns the corner with steep decline in COVID-19 cases

On April 1 2020, Dharavi in Mumbai (Asia’s largest slum and one of the most densely populated areas in the world) recorded its first COVID-19 positive case. Nearly three months later, the Union Health Ministry says that the Maharashtra government and the Brihanmumbai Municipal Corporation (BMC) have been able to effectively bring down the COVID-19 spread in Dharavi.

“The proactive measures adopted by the BMC have reduced the growth rate to 4.3% in May and further to 1.02% in June. These measures also ensured an improved case doubling time to 43 days in May and 78 days in June.”

COVID-19 cases have been rising in Bengaluru and one of the reasons could well be the lack of discipline among people who have to undergo home quarantine. As of June 20, about 44% of the total 1.31 lakh violations in home quarantine has been reported or observed in Bengaluru, according to data from the State authorities.

Of the total 58,832 complaints reported in Bengaluru, 15,157 people have been warned. Once complaints are received, people either receive a warning or are sent to institutional quarantine. In many cases, FIRs have also been filed against them.